A new version of SU Podium V2 has been released - Beta .50 Trial for Win/ Mac. This V2 Beta version is open to all. There are no requirements to download. Start evaluating, using and producing beautiful, high quality images from your SketchUp models with this new SU Podium version.

The trial version has one major limitation - rendered image resolution size will not exceed the SketchUp viewport size. 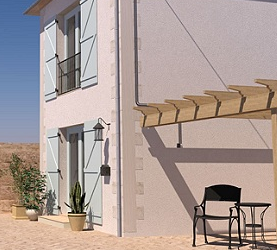 Fredo has released an update to his Curviloft Loft and Skinning plugin for SketchUp . This brings the version up to 1.0c. Although still not out of beta, it offers some new features and bug-fixes over the previous beta:

* Skinning accept preselection of contours in more cases. Thanks to Daniel S. for signaling some configurations not working. Also some problems mentioned by Mac users should normally be fixed.
* For Loft Along Path, improvements for cases with a single contour (kind of FollowMe)

On top of potential bugs and geometry issues (including bugsplats), there are still some limitations and unfinished work:

Picking up where we left off last time, the past weeks have brought another slew of Sketchup plugins to the SketchUp community.

Light Up 1.9
LightUp version 1.9 was released earlier this year and it included a time-saving, built-in IES browser. Along with 1.9, LightUp Player was released. LightUp Player is a stand-alone program that lets people view your LightUp files without them needing to own the full version.

Also on the LightUp pages is a tutorial video showing how to add an animated flame in LightUp. See LightUp's resources page for that, and more LightUp tutorials.

LightUp's developer, AdamB, also posted a little plugin called Scene Tweaker, that "allows you to quickly tweak the position and orientation of Scene Cameras." Check it out on Sketchucation Forums.

Google Spreadsheet Link Plugin
morisdov released a plugin that can link a model's attributes to a Google Docs Spreadsheet. Visit morisdov's plugin site for information and download. And if you're interested in object animation in Sketchup, be sure to check out his "proper animation" plugin which lets you easily animate objects between Scenes.

Wudworx Board Maker
Wudworx has released their 3rd woodworking plugin for SketchUp. Board Maker makes making boards about as easy as it gets. Board dimensions can be precisely entered, and the boards are added to the model as Components for re-use. Wudworx's other plugins include a Dovetail and a Mortise & Tenon plugin.

sahi's plugins
Sketchucation member sahi posted 2 new plugins. One is called Copy Brick and is an on-screen tool for transforming components as you place them in a model.  The 2nd, Create Image (rotate) exports a set of images of a model which can then be sewn together to create an animated fly-around; very similar to the Web Exporter released by Google.

gavvy's plugins
SCF member gavvy released a plugin that toggles all of your toolbars between visible and invisible. It goes by the name Show and Hide your Toolbars. Note it's all or nothing - you don't get to choose which toolbars are toggled.