Due to inconsistent file names for past versions, this file (jf_spheretool.rb) is meant to replace any of the following files in the Plugins folder:
---
Download jf_spheretool.rb 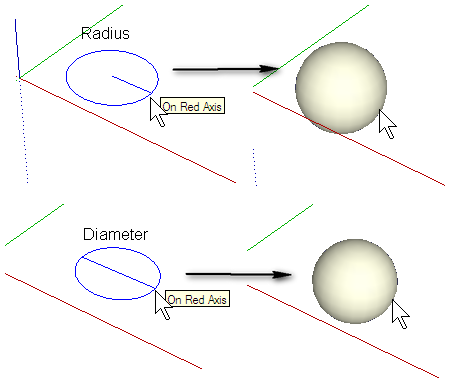 Here's a quick tool for drawing spheres. It creates a Sphere option under the Draw menu.

Download the script and move it into your Plugins directory.

A group is created to hold the sphere. You can enter the number of segments you would like to use. It defaults to 24. Even-numbered segments work best, odd one cause unpredictable results.

Nice plugin! One small issue; it seems to work well with larger spheres, but fails at small sizes (e.g. 3mm radius). I worked around this by creating it four times too big, then scaling (end result is correct).

soundripple.com - yes, but that is a limitation of SketchUp. The smallest allowed Edge length is 0.001". At a 3mm radius, you will get some very small edges especially at the poles.

As you found out, if you work at a larger size then scale down, you can get smaller geometry.

thank you very much one more user you have now

thank you very much for the useful tool.
but I can't change the segment number. Sketchup crashes!
I'm using sketchup 8. Maybe this plugin still can not be used in Su8?

Great plugin! It looks like the plugin causes Sketchup to crash if an odd number is entered for segments

Hi Jim!
Have you checked if this works with Su2015?

here it crashes every time...